Are you doing what you can to be ready for retirement? 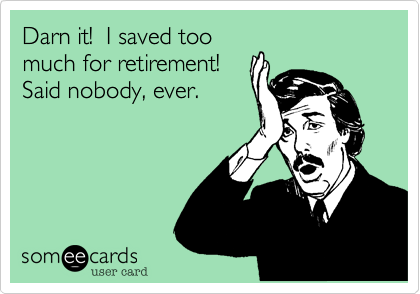 Following are a couple of tips, both for those in the early stages of their career and those of us getting closer to retirement.

To you young people out there, it is never too early to start saving for retirement. Here is a great example of how the value of your “nest egg” depends on when you start that savings.

It makes a huge difference if you are able to start early. If that isn’t an option, don’t despair, start now and put away as much as you can. Adjust some of your other spending habits to accommodate it. You won’t be sorry.

Perhaps a really easy way to increase the investment in your retirement savings is to take that annual raise or potential bonus and put at least half of it into your retirement savings. You won’t notice it gone because you never had it to begin with.
Remember if your company doesn’t provide a 401k or IRA plan, you still have the option to contribute to an IRA savings on your own.

Now, I admit, I am closer to retirement than I am to the start of my career. The big thing I have been working on is to get my investments consolidated down into two places. Throughout my career, with each successive move to a new employer, I would leave my old employer-sponsored 401k plan in place . My theory was that if I had my money stored in different retirement plans, I was diversified, right? The next thing I knew, I had money in eight different places. Well . . . as we age, having several different plans to manage becomes less and less of a good idea. Do you really want to go into retirement and have to deal with eight different investment companies? NO. You can still have a diversified portfolio without having your money in several places. So I set about getting all of my ducks into two ponds. Ahhhh, much easier to monitor the progress of two 401k’s rather than eight.