When our graphic designer, Kristin, first released the branding for the Society of Wetland Scientists’ (SWS) 2017 Annual Meeting, we all knew that the little tree frog that was featured was going to be a star. There had already been extensive discussion among the Society’s board as to the accuracy of the frog, in relation to the meeting’s destination: Puerto Rico. As a group of wetland enthusiasts, it made sense why they were so passionate about the frog’s geographical accuracy. With that conversation alone, it was clear that SWS had already embraced him as the unofficial mascot of the meeting; so, staff thought, “Why not just make it official?” From then on, the tree frog was at the center of all meeting promotions.

We started using the frog as a mascot as a way to promote different aspects of the meeting. At the end of each meeting-specific email, the frog spokesman would include an interesting fact about the meeting’s theme, field trips or hotel and convention spaces.

In a similar way, we would use these “Did You Know” facts to promote Puerto Rico as a destination. While the Society of Wetland Scientists is an international association with over 3,000 members, most of membership resides in the continental United States. Therefore, most of our annual meetings do, as well. With that in mind, it was that much more important to support this year’s “destination” location.

As members became more acquainted with the mascot through email, we determined that it was important to put a name to the face (plus, he was too cute not to name). And with the association already so invested in this little guy’s authenticity, it made sense to put the power in the membership’s hands. 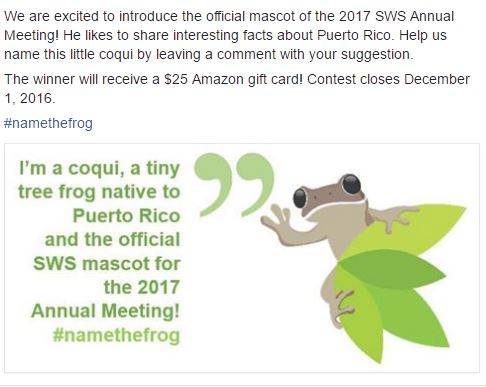 We polled the membership on Facebook and Twitter, keeping it as simple as possible, by asking them to either comment on the Facebook post or tweet at us with #namethefrog. Admittedly, suggestions were hard to come by at first; however, once prominent members within the Society started submitting suggestions, others soon followed.

By hosting the contest via social media, we knowingly limited the member response. Yet, it was strategically marketed to encourage others to “like” and “follow” our social media pages. Those who had subscribed to our pages were then rewarded by having the privilege to vote for the frog’s name. 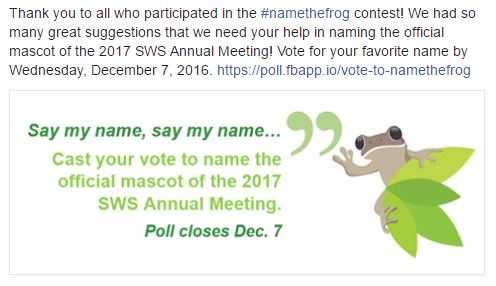 In the end, SWS cared just as much for the authenticity of the frog’s name as they did for his physical form. “Humberto” was chosen specifically for its connection to the Spanish word for wetland: humedal.

We used the momentum from the #namethefrog contest to create Humberto’s own Twitter account. Those facts that we had been including in the meeting emails were then also highlighted as #frogfacts on Twitter. While the account was specifically created to promote the annual meeting, we’ve since used it to cross-promote other SWS event and marketing campaigns. For instance, to celebrate Earth Day, we’re encouraging followers to share and tag us in their Earth Day photos, using #SWSEarthDay. To kick off this initiative, we had Humberto share one of his photos. 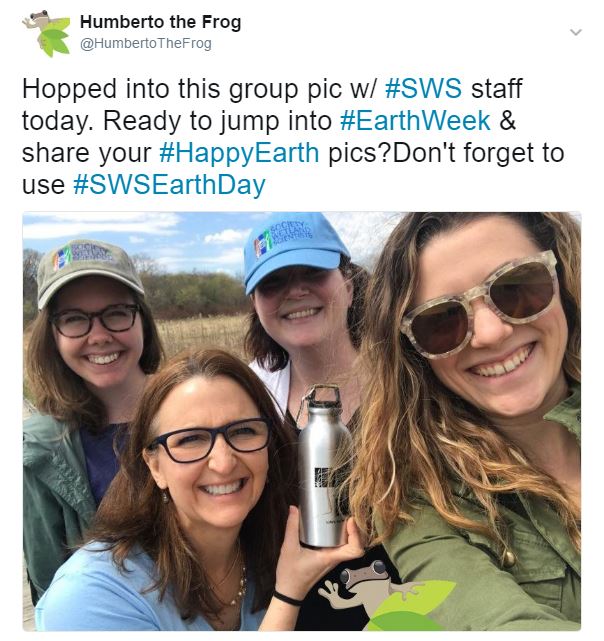 Social media, specifically Twitter, has enabled members to actively engage with Humberto. It has become a main source of meeting information and a direct line to ask meeting-specific questions. Any interaction helps to increase visibility, not only for the meeting, but for the Society, as well. 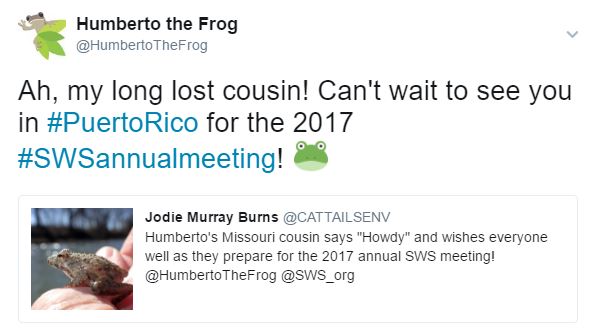 Humberto was originally intended to be an outlet for relaying important meeting information, organically. He has since formed a personal brand that has helped reinforce the overall brand of the 2017 meeting, and to some extent, rebrand the Society of Wetland Scientists, as a whole. SWS will always be a professional society, focused on wetland science, but its membership has shaped the Society into one that appreciates fun, too.

Mascots won’t work for every association, nor will they help for every meeting. In this case, from his inception, SWS was invested in this frog. Members’ dedication to accuracy, paired with their willingness to embrace his mascot status, made this marketing campaign successful.

Live chat for associations: How to incorporate it into your member engagement strategy

We all want instant answers when we go online, and our members (prospective and existing) are no different. B2B and B2C companies have long known that quick service enhances the customer experience, leaving a positive overall impression. That’s why live chat has become so popular in online commerce. Live chat may not be new in the for-profit world, but for most resource-strapped, small/medium staff associations and AMCs, it is.

According to Insite Software, live chat on your website can directly lead to “better member engagement, higher conversion and member satisfaction.”

Live chat for associations
For associations, live chat can lighten the load of your call center and administrative staff. Plus, because live chat is mobile friendly, association staff can easily monitor activity and answer questions anytime, anywhere. That doesn’t mean live chat requires 24/7 chained-to-a-desk service. Many companies staff their chat during business hours only and offer the option to leave a message in the off hours. This is totally acceptable.

An added bonus to being instantly accessible is the ability to see where your web visitors come from (a Google search or referring site) or what organization they are with. It’s gratifying when you recognize returning visitors by name.

Most live chat services are relatively inexpensive, starting $5 or $10 per month. Many have a free trial or “freemium” model. Some even integrate seamlessly with Wordpress, Hubspot, Salesforce, and other online tools you’re already using.

Enhancing member satisfaction
Live chat gives our staff the opportunity to engage with our members in real time. Thanks to a small piece of code that I installed on our association website, I’m alerted instantly when (“Ding!) a member is having login problems that cannot be fixed by the “Forgot Password” button, (“Ding!”) a member has a question about completing his online profile, and (“Ding!”) a prospective member has some questions before submitting an application for membership.

With live chat, I enjoy being able to quickly help our members go about their business with usually little impact on my day. In my experience, most of the interactions involve some online technical issue, finding a resource for a member or nurturing a potential sponsor or member relationship. Like any good customer experience, listening and providing decisive help is key.

If you use live chat, you will notice patterns in the questions you get. They may help identify problems with your website, conference registration site or learning management system. Perhaps a web page is confusing or lacks some information. Share what you learn with your marketing or web person to ensure that information or the customer-flow through your website is optimized.

While some days are busier than others and it appears as though I am falling down a rabbit hole of busy work, I know that, with live chat, I am directly affecting the bottom line of the association by enhancing customer satisfaction — for only a bit of labor and little if any monthly fee. 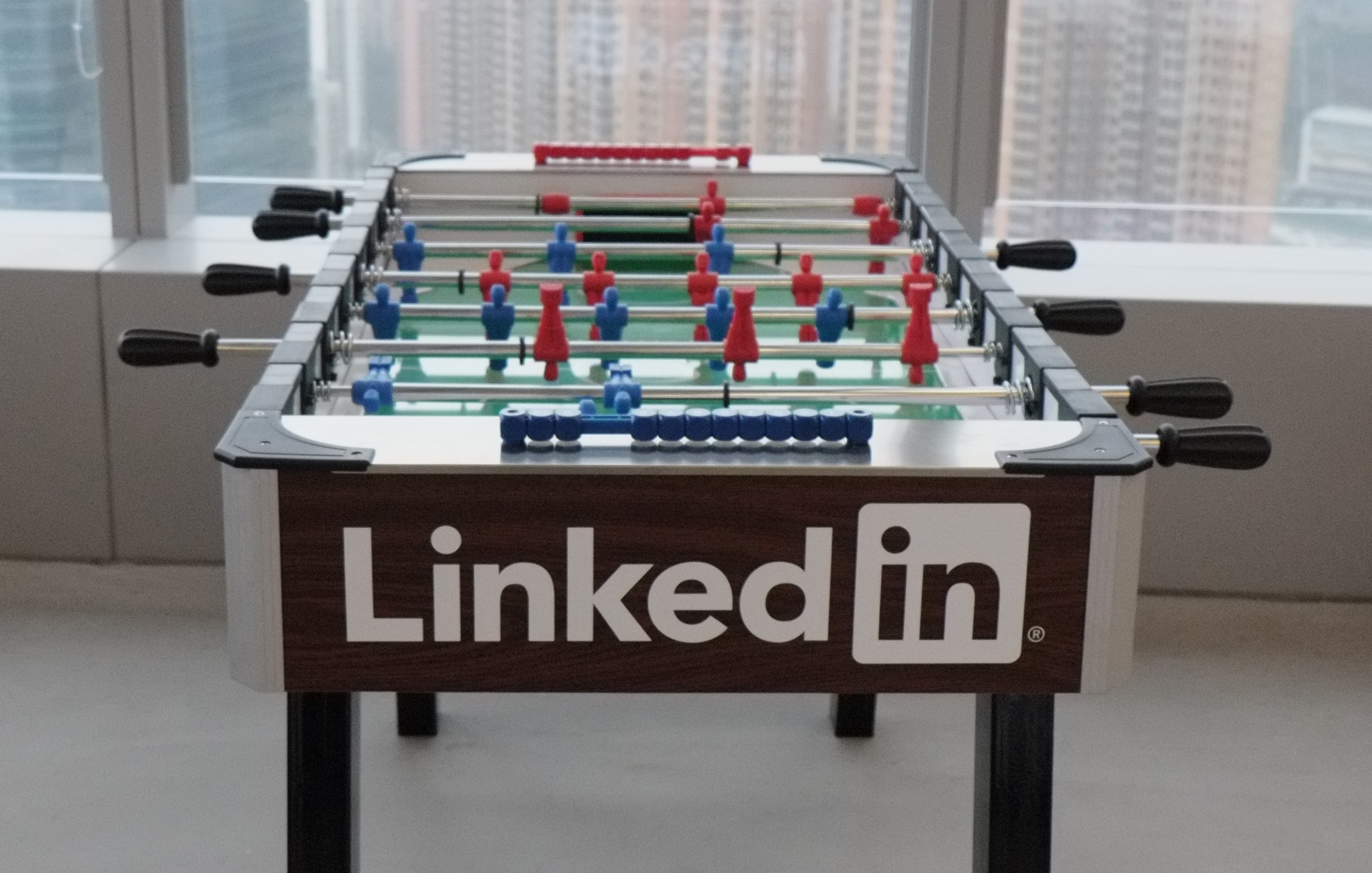 People use LinkedIn for some of the same reasons they join associations — for professional development and to connect with colleagues. This makes LinkedIn a great tool for associations! It provides an opportunity to both expand and add value to membership through increased brand awareness, engaging with members and reaching potential new members.

Discussion group
Cultivate a sense of community among your target members, by starting a discussion group around your industry or specific topic of interest. It's generally recommended that you keep topics here general in nature, rather than centering the group around your association exclusively. When setting up your group, use industry key words in your group name and description, and consider making your group open (not by invitation only), but subject to group manager approval. Here are some additional suggestions for maximizing engagement within your discussion group:

As you continue to build and leverage your presence on LinkedIn, cross promote both your profile and discussion group wherever possible, including on your website, in your newsletter and on your staff business cards. Likewise, every time you host a webinar or attend a conference, be sure to put out notice, both on your profile and in your group, that you will be in attendance, as well as invite everyone you meet to join you on LinkedIn.

Building a valuable LinkedIn presence may take some time, but in the end you will reap a more robust association through increased membership growth and higher member engagement.

Growing your association and yourself through real connections

I heard someone say in a presentation recently, “Don’t let technology rule you. Be a champion of personal relationships.” As an association manager, I do exactly that – pick up the phone and meet face-to-face as often as I can to grow relationships and, in turn, my association clients through personal contact and real connections. This face-to-face time with our clients and members is the foundation that our associations were built on and it benefits us all both professionally and personally.

I’ve seen the power of these connections first-hand with one of my clients. A year ago I invited a woman who was a long-time member, but not very involved, to be the subject of an executive profile in the association’s magazine. The profile led to a face-to-face meeting about a program that her organization offered and an additional article in the magazine. She then agreed to serve on a panel at our annual meeting and, there, met a contact from a large organization. That contact led to an opportunity to meet with them about one of her organization’s programs and now they’re working on a future collaboration. It’s the perfect example of how a small outreach can lead to bigger things and turn a checkbook member into an engaged and happy one!

Here are some quick ways to make personal connections.

Pick up the phone. With all of the ways to contact people these days, we often neglect to pick up the phone and actually make a call. Sure, you may get voice mail, but even that counts.

Handwrite a note. In the age of email and the multitude of other ways to contact people, the art of the personal handwritten note may seem outdated. However, people appreciate when you spend a few extra minutes to write a note. On more than one occasion, I’ve received a handwritten thank you in response to my note!

Visit members. Making an appointment for a quick visit with a member is a wonderful way to make that personal connection, get feedback on your association’s offerings and learn what else you can do to assist your members. If it’s not possible to visit your members due to geographic or financial constraints, see if they’d be willing to Skype.

Make a personal ask. The next time you’re looking for volunteers to serve on a committee, participate in a panel discussion or write a blog or article, reach out personally as opposed to sending a blanket call for volunteers. People will love that you recognize they have a talent you’re interested in utilizing and appreciate that you are taking the time to personally invite them to participate.

I challenge you to start connecting by making one phone call, writing one letter and asking one person to participate in your organization at a more engaged level this week. I promise you’ll be glad you did!