Food and Beverage - The Other Attrition

For meeting planners, the word “attrition” is a pretty common industry term, most often used in reference to guest rooms. However, paying attention to food and beverage guarantees — the “other attrition” — is equally important.

Usually hotel contracts have a food and beverage (F&B) clause that requires a group to generate a minimum amount of F&B revenue through the course of the meeting. The F&B clause goes on to say that if the minimum amount of revenue is not generated, the group is responsible for making up the difference. The F&B clause will require the shortfall plus the tax. Whether it’s called an F&B guarantee or minimum, it really is an attrition clause.

Here are a few tips to avoid paying more than you need to if a shortfall occurs:

Know the profit margin
Often, clauses are based on the difference between the guaranteed F&B revenue and the actual F&B costs incurred by the group. If you can, do not agree to terms that require monetary damages based on lost revenue. Instead, try to base it on lost profit. Know the profit margin!

Last year, we were negotiating with a hotel in San Diego for a large convention taking place in 2018. The hotel incorporated an extremely high food and beverage minimum in the contract. Knowing the profit margins for F&B helped us successfully negotiate terms to minimize the potential amount owed if a shortfall would occur.

Industry standard profit margins for food and beverage are between 35 and 40%. For example, if a group signs a contract with a $50,000 minimum, but only realizes $40,000, there is a shortfall. However, it does not make sense to pay for the full amount of $10,000. Despite the shortfall, the hotel never had to order the food, pay any staff to prepare it, or serve it. Instead the group should negotiate to pay between 35 and 40% of the shortfall.

To calculate the amount owed, take the total shortfall amount and multiply it by the agreed upon profit margin percentage.

Know if F&B damages are subject to sales tax
Before agreeing to pay taxes on shortfalls, check with the state in which your meeting is being held to see if taxes are required by law. If a portion of the F&B minimum guarantee is never purchased, then usually no sales tax is owed because nothing was sold in the first place. Know this before you sign the contract.

Consider ordering more food rather than paying the shortfall
If there is a shortfall, consider purchasing enough extra food to make up the difference. This could mean enhancements to a menu, upgrading a reception or ordering a fancier dessert.

Attendees will likely have a more favorable impression of the event and the group will avoid paying F&B damages to the hotel without getting something in return. 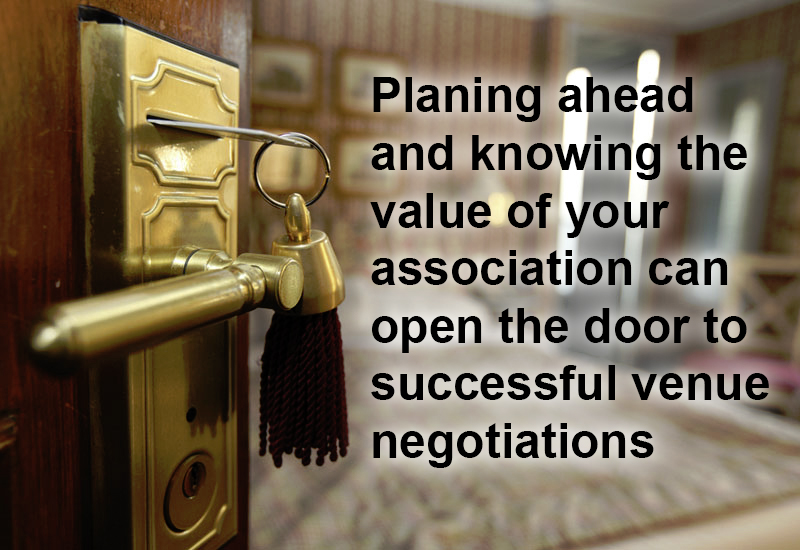 Is your association seeing the impacts of the seller’s market when it comes to finding a hotel partner to host your next event? Don’t expect this trend to fade in 2016. Hotel demand in many destinations around North America has surpassed supply. Although the 2016 Global Travel Price Outlook indicates that hotel construction is booming in the United States with nearly 100,000 new rooms added in 2015, the report also suggests that hotel demand continues to grow at up to quadruple the rate of supply.

If supply and demand concerns aren’t enough to get you fired up, how about this? According to the 2016 Meetings and Events Forecast from Carlson Wagonlit Travel (CWT) Meetings & Events, room rates will grow by 4.3%.

How can you tackle the issues of supply and demand plus increasing nightly room rates head on? Plan ahead. Contract lead time continues to shrink and often hotels in high-demand markets will no longer hold space when responding to RFPs. Increased lead time can increase you negotiating power.

Channel your inner Francis Bacon who once said knowledge is power. Be fluent in the value your meeting brings to the venue and be prepared to readily talk stats such as pick-up history, food and beverage spend, required square footage of meeting space and so on.

Keep your eye on the numbers. Food and beverage costs will continue to be a significant driver of per-attendee costs. The 2016 Global Travel Price Outlook also predicts a 4.5% increase per attendee, per day! The pressures of keeping up with the latest trends and rising ingredient prices are major contributing factors. In fact, the National Restaurant Association says that wholesale food prices have surged nearly 25% during the past five years!

All of this said, the most important piece of advice is to negotiate with care, as attrition and cancellation clauses are becoming more and more strict. Good luck!