Growing your association and yourself through real connections

I heard someone say in a presentation recently, “Don’t let technology rule you. Be a champion of personal relationships.” As an association manager, I do exactly that – pick up the phone and meet face-to-face as often as I can to grow relationships and, in turn, my association clients through personal contact and real connections. This face-to-face time with our clients and members is the foundation that our associations were built on and it benefits us all both professionally and personally.

I’ve seen the power of these connections first-hand with one of my clients. A year ago I invited a woman who was a long-time member, but not very involved, to be the subject of an executive profile in the association’s magazine. The profile led to a face-to-face meeting about a program that her organization offered and an additional article in the magazine. She then agreed to serve on a panel at our annual meeting and, there, met a contact from a large organization. That contact led to an opportunity to meet with them about one of her organization’s programs and now they’re working on a future collaboration. It’s the perfect example of how a small outreach can lead to bigger things and turn a checkbook member into an engaged and happy one!

Here are some quick ways to make personal connections.

Pick up the phone. With all of the ways to contact people these days, we often neglect to pick up the phone and actually make a call. Sure, you may get voice mail, but even that counts.

Handwrite a note. In the age of email and the multitude of other ways to contact people, the art of the personal handwritten note may seem outdated. However, people appreciate when you spend a few extra minutes to write a note. On more than one occasion, I’ve received a handwritten thank you in response to my note!

Visit members. Making an appointment for a quick visit with a member is a wonderful way to make that personal connection, get feedback on your association’s offerings and learn what else you can do to assist your members. If it’s not possible to visit your members due to geographic or financial constraints, see if they’d be willing to Skype.

Make a personal ask. The next time you’re looking for volunteers to serve on a committee, participate in a panel discussion or write a blog or article, reach out personally as opposed to sending a blanket call for volunteers. People will love that you recognize they have a talent you’re interested in utilizing and appreciate that you are taking the time to personally invite them to participate.

I challenge you to start connecting by making one phone call, writing one letter and asking one person to participate in your organization at a more engaged level this week. I promise you’ll be glad you did! 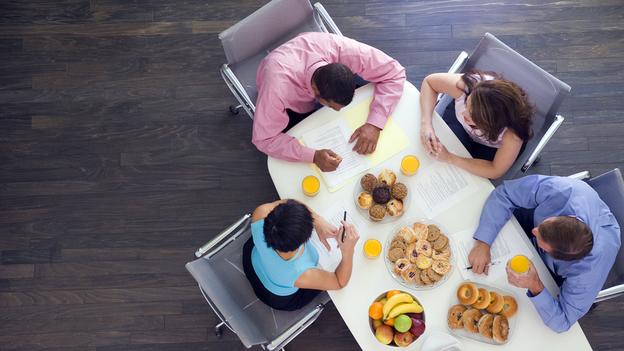 Great tips on increasing engagement during meetings — like, bring food!

I once heard a generational expert say that people my age prefer face-to-face meetings over phone calls or email. That seems like a broad generalization to make about 76 million Americans, but I will say that a meeting doesn’t have to be a waste of time – if all those involved in a project or decision are participating.

I learned a lot about leading meetings during the two terms I served on the council of a church with more than 4,000 members and an annual operating budget of more than $1 million. The church was growing rapidly, which meant the council needed to reach consensus on a series of issues related to property, staffing and resources.

Every year, when new council members started their terms, the senior pastor laid down the ground rules: “If you have something to say, say it here, not in a meeting after the meeting in the church parking lot.” He also said, “Debate all you want during the meeting, but when we leave this room, we stand united.” Those are good rules when you have volunteers making decisions in matters that members care deeply about. Truth be told, those are good rules for any group.

The pastor started every council meeting by asking each person to offer a brief joy and concern. I’ve noticed that people who speak early on in meetings tend to participate more throughout the meeting, so I started using the joys-and-concerns tactic at work. I started meetings by asking each participant to briefly share something on their minds: It could be anything – news about a client, a rapidly approaching deadline, a sick dog – you name it. Take five minutes to let people say what’s on their mind and you clear the way for productive participation, plus you become aware of other issues that may need your attention.

When major decisions were about to be put to a vote, the pastor asked each person to comment. When people know they will be asked to articulate a response – more than a yea or nay – they tend to consider it more carefully. More than once, after going around the table and hearing others’ responses, someone would say, “Wait. I’ve changed my mind.” Yes, the meetings could run late, but the decisions were solid.

Other suggestions, based on countless hours spent in meetings:

Prepare people to participate. Send a brief agenda with the topics you want to discuss and specific goals for the meeting. Tell participants how they can contribute. For example, if “leadership retreat” is an agenda item, consider writing “make a decision about the retreat destination – bring one or two location suggestions.”

Offer food. There is something almost magical about breaking bread together that helps people open up. I think it’s hardwired into our makeup to feel more at ease with people we share nourishment with, so bring doughnuts.

Encourage everyone to be fully present. If people are looking at their laptops, whispering in a side conversation, texting or passing notes (it happens!), you’re going to find people have less and less to say because they perceive that others aren’t listening.

Give people the freedom to fail. If the environment doesn’t allow for human error, humans will stop participating. “The greatest mistake you can make in life is to be continually fearing you will make one,” said Elbert Hubbard. People engage with the group when they feel safe.

Practice the Golden Rule. Encourage participants to treat others as they wish to be treated. Just as parents are encouraged to separate the behavior from the child, people sometimes need to be reminded to challenge the idea, not the person. Taunting or putting someone down in front of others is not acceptable.

End on a high note. I won’t suggest you end every meeting with a prayer, as the church council did, although you might want to say a silent one. Instead, wrap up by explaining what the next steps are, acknowledging the group’s accomplishment and recognizing the value of everyone’s contribution. Everyone will leave the room feeling like their time was well spent.

Comment, call or email me (hey, we could even meet!) with your tips for making meetings time well spent.